Yule (the Winter Solstice) is coming up fast, + a bunch of Online Rituals!

Posted on December 5, 2022 by NaturalisticPaganism

For many of us, this is a big Sabbat, which takes a more preparation (and if you are buying gifts, the Naturalistic Pagan Gift List here might help).  Whether it’s due to cultural inertia, or kid’s expectations, the importance of Stars and this Sabbat, or whatever, it’s a big deal in our family.  We are already well along with the the Solstice doors Advent practice and with decorating.  If you have been doing your Winter Solstice traditions for years, if you are just starting your family and are currently building the traditions which will bring the Universe to your kids, or anything in between, I hope that the traditions and practices on this post are found to be useful, inspiring, or just comforting.

As with recent Sabbats, we have online opportunities for rituals!  There are too many to count (and the eventbrite link lists likely hundreds of them)! Some information is not up yet, so I’ll update this list – you may want to check back on this post in a week or two.  Also, many require preregistration, getting certain ritual tools ready, etc – so be sure to plan ahead and check them out ahead of time for each one you plan to go to.

This year, the December Solstice (Winter in the Northern Hemisphere, Summer in the South) happens on December 21st for nearly everyone.  The precise date and time for the quarters can be found here (I use the traditional dates of February 2, May 1, August 1 and October 31 for the cross-quarters).  In our family, we’ll sometimes celebrate the morning after the longest night, which is not always the same as the shortest day.  That’s the case this year for a lot of people.  Anyone towards the East, such as in Europe, the longest night is the night after the Solstice (the night of December 21-December 22).   The longest night is the night before the Winter Solstice if the moment of the Solstice happens prior to noon, and is the night following the Winter Solstice day if the moment of the Solstice happens after noon.

Jon Cleland Host of the Naturalistic Paganism Yahoo group celebrates the Solstice with his family, using a theme of stars and supernovae, including opening a Solstice door every day before Yule (the doors can be seen at right).  This practice of a Winter Solstice calendar was recently highlighted here.  The full description of all their celebrations can be found here, as well as printable notes to go with the Solstice door candy.  These include a Yule log and sunrise viewing: 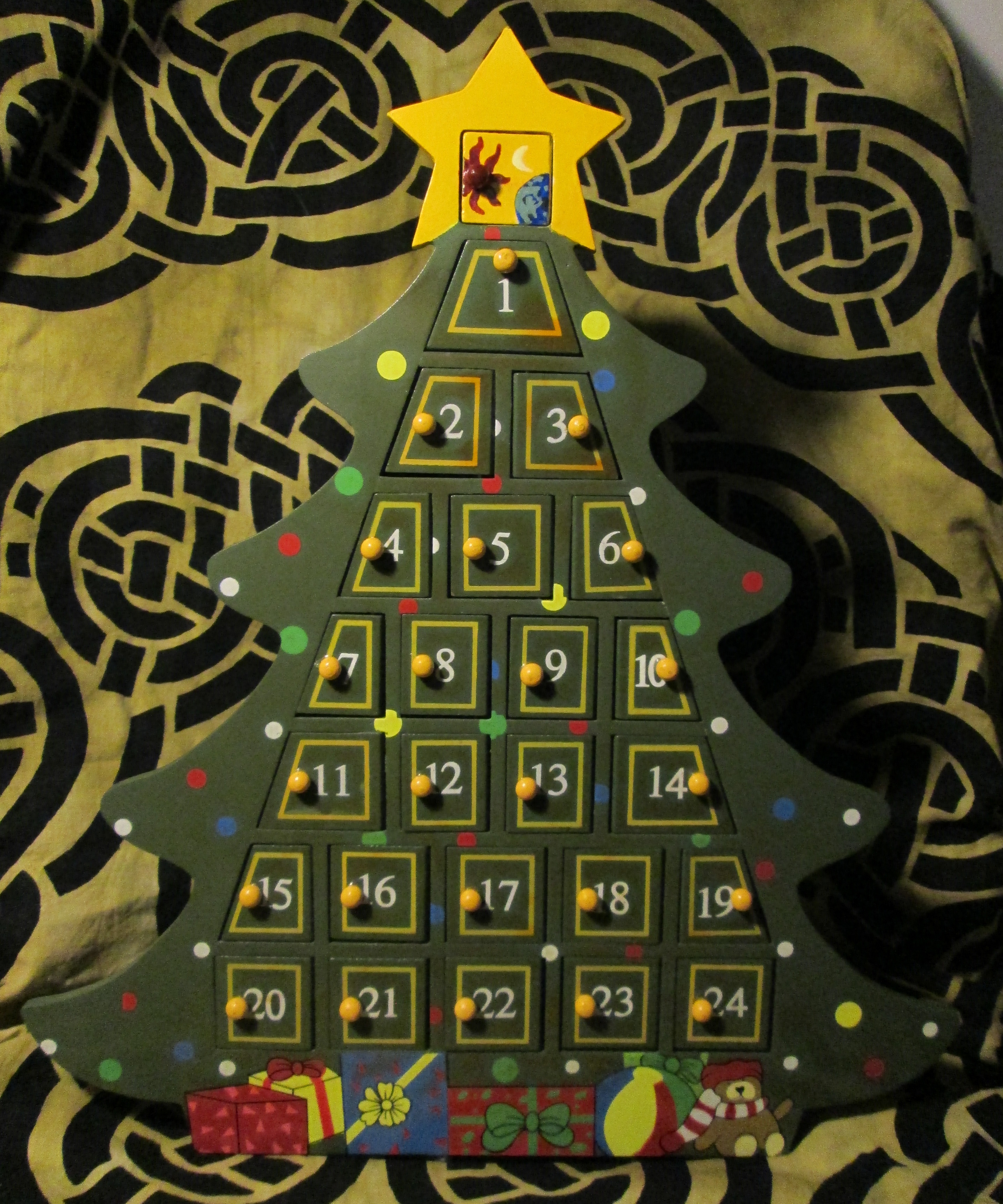 ← No-Nonsense Paganism: My Winter Ritual
Playlist for the Wheel of the Year: Winter Solstice →

One Comment on “Yule (the Winter Solstice) is coming up fast, + a bunch of Online Rituals!”