Happy Samhain! A Samhain nested in an eclipse season? Yes! Also, here are some Blood Moon ritual ideas for the Eclipse Nov. 8th.

Posted on October 31, 2022 by NaturalisticPaganism

Happy Samhain!  As the darkness falls this Samhain night, our trillions of Ancestors visit us.  Who are they?  What can they offer you for your struggles today?  They can help you anytime during the year – not just now – if you ask.

For many of our Ancestors, eclipses were times of terror and dread.  Now we can forecast them with precision down to a fraction of a second, and understand well what is going on.  Because eclipses never happen singly (a solar or lunar eclipse always has one of the other type ~14 days away), that “block” of two weeks is an “eclipse season”.  This year, we are fortunate enough to have Samhain fall right in the middle of an eclipse season!  The paired solar eclipse was October 25th, and the upcoming lunar eclipse is November 8th.  To me, this is an especially moving concurrence, because eclipses of both types captured the attention of our Ancestors, and both eclipses and my Ancestors are such a big part of my spirituality.  Is this true for you?

As we celebrate another sacred Samhain we have many opportunities for online Samhain celebrations and rituals, many of them today.  The links were given in this post, along with the many ways some of us are celebrating.  Also, from The Wonder Naturalistic Pagan Podcast, we have a podcast celebrating Samhain, one on the many connections with our Ancestors.  Happy Samhain everyone!!

Will you incorporate the fact that this is one of the few Samhain’s inside an eclipse season into your rituals?  Conversely, you might be planning a ritual for the eclipse itself, and may include a nod to the Ancestors, with the proximity to Samhain. 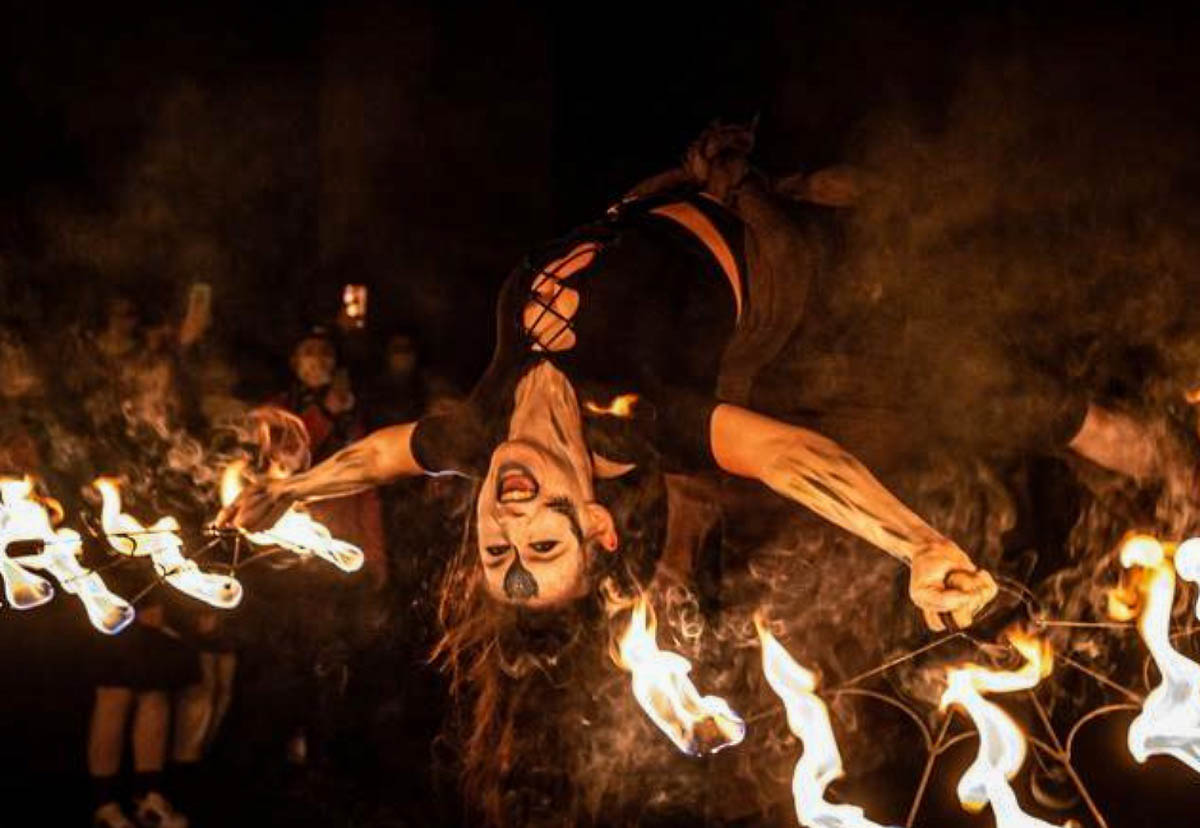 Even though it will be more than 240,000 miles away, the stunning spectacle of the Lunar Eclipse will soon capture the gaze of many millions of people.  What do you have planned for this magical time?  One important part of our focus on this world is to be politically active – and for those in the United States, this eclipse happens on the day of the mid-term elections.  Your vote can be part of your ritual!  Remember that voting early is also a good idea, both to make sure your vote gets in as well as to fit your schedule.

This one will be a total Lunar Eclipse!  Are you ready?  Can you share this with a child?  Like so much of our Universe, this is another opportunity celebrate our joy of life – with help from our world.  Are there too many clouds where you are?  Use this live video!

When, exactly, will it be?  Here are the times for each of the contact points (what are those?  Look here).

“Blood” refers to the red color of the Moon during the umbral phase of a lunar eclipse.  I find the cause of this red color to be amazing!  Imagine that you were at the North Pole, watching the Sun just peek over the horizon.  You would, of course, see the sun as an orange disc.  Right near the horizon, this would deepen to a reddish color, and father away from the horizon, it would be yellowish.  Have you ever wondered why that is the case?  It turns out that many of the most common types of light scattering (including those from dust as well as air) scatter the shorter wavelength colors (the bluer colors) to the sides, and allow the longer wavelength (redder) colors to continue in a straight line.  This means that when the Sun appears at the horizon, the Sun’s light is going through a long path of atmosphere, and hence being scattered more, so the overall brightness goes down, and with the blue colors scattered to the sides, the remaining colors are redder.  This is also why we humans (incorrectly) often draw the Sun as yellow in drawings.  The Sun’s light is white (otherwise white objects would look yellow in daylight), but we associate yellow with Sunlight because when the Sun is dim enough to look at,  it usually is lower in the sky, and hence, yellow.  In reality, because the Sun’s light is pure white, and no more yellow than it is, say, green, a yellow Sun high in the sky in child’s drawing makes as much literal sense as a green Sun does!

So, back to the North Pole.  You can see now that the light from Sun which just misses your face to the right or the left would continue off into space, behind you.  In fact, the light which “just misses” the Earth – which goes through the most atmosphere possible – will be bent (refracted) “down” from your position.  When a lunar eclipse occurs, the the Earth fully blocks all straight paths from the Sun to the Moon – so the *only* light that can reach the Moon (and illuminate it, as the Moon makes no light on it’s own), is this light which is refracted into the Earth’s shadow.  The surprising realization is that when one sees the blood moon, one is seeing only light from all of the sunsets and sunrises happening around the Earth at the very moment!  (see the top image)  Wow! This incredible realization has made me wonder – why we haven’t put a remote camera on the Moon, which could continually broadcast the image of the view of the Earth from the Moon?  That image could be on a constantly updated webpage – and during a total lunar eclipse, the Earth would appear as a blazing ring of fire!  This would be dirt cheap – especially compared to things like the massive 2018 giveaway to the 1%, or the Iraq war.  Reminders, yet again, that we “don’t yet live in a scientific age”, as Dr. Feynman pointed out many decades ago.

This refers to the Native American practice of naming the full moons – note that due to geometry, a lunar eclipse can only happen at a full moon.  This is a great tradition as it helps us keep the year in perspective and be aware of the turning year as the Wheel of the Year turns.  In some tribal traditions, the eleventh full moon after the Winter Solstice (Yule) is the “freezing over” moon (because this is when ponds and lakes freeze over).  Other tribes and traditions have other names, but this is the one which is associated with the tribes of this area (Michigan).

Where can you see it from?

Pretty much anyplace outside of Africa and Europe can see at least some of the eclipse.

One special feature of Lunar Eclipses, is that because these are on the Moon, everyone can see them at exactly the same time.  This is a little hard to explain.  By contrast, solar eclipses are visible in different places (say, Nebraska vs. Illinois) at different times.  But because everyone sees the same Moon, everyone sees the lunar eclipse simultaneously!  This can be an important part of everyone’s rituals – to know that as you are conducting your ritual, many millions of people are watching this same moon – and many are conducting their rituals with you.

While Total Lunar Eeclipses are more common than Total Solar Eclipses (especially when one remembers that solar eclipses are regional, as mentioned above), they are still uncommon.  Think about what life will be like in May next year when the next Total Lunar Eclipse happens – it’s not long, but some things will have changed (and after next year, the next Total Lunar Eclipse isn’t until 2025).  Who, in your life now, might not still be alive?  What new lives may have entered your life?  What else might be different?  This eclipse, like all eclipses, is a moment we and look at time on a longer scale.  Do you want to incorporate this into your ritual?

An eclipse is a powerful time that forever strengthens one’s bond to the rest of our Universe, and thus a sacred time for us Naturalistic Pagans – and a good time for a ritual.  Rituals are often more powerful if we feel connected to them.  To gain that connection, it helps to be involved in the writing and planning of the ritual – whether that’s from scratch or just making minor tweaks.  So here are some ideas for rituals – and more can be found with some looking online.  For instance,  this site has several good rituals, and this closing:

With this eclipse, I am made new again.

I am untarnished, whole, and true.

There is nothing weighing me down,

I am free to fly and break through.

Set up your altar, with a red or black cloth, quarter cauldrons (typical cauldron contents include incense or a feather for East, a candle for South, a seashell or water for West, and a rock or earth for North, many of these on a bed of sand) , and items to be charged by the eclipse reflection of the sunsets & sunrises.  You may want to mark the wider ritual circle with a stone at each quarter (and perhaps each cross-quarter).

Like other eclipses, anything under the light of the eclipse can be considered to be charged with the power of the eclipse.  In this case, all objects will be charged by the reflected light of all the sunsets and sunrises around the world!  Wow!!

As I write this,   That reminds me that a song or chant would be a nice addition to this ritual, too.  Whether you celebrate in the path of totality, far from it, or at some other time, may your celebrations be blessed.

*(all the details and contact times are in this link.)

← Playlist for the Wheel of the Year: Mid-Autumn
New Series!  Paganism is Different! Part 0 [Stardust, Contemplating] →