On “coming out” to my Catholic Community, by Bart Everson [A Pedagogy of Gaia]

Posted on November 7, 2020 by NaturalisticPaganism 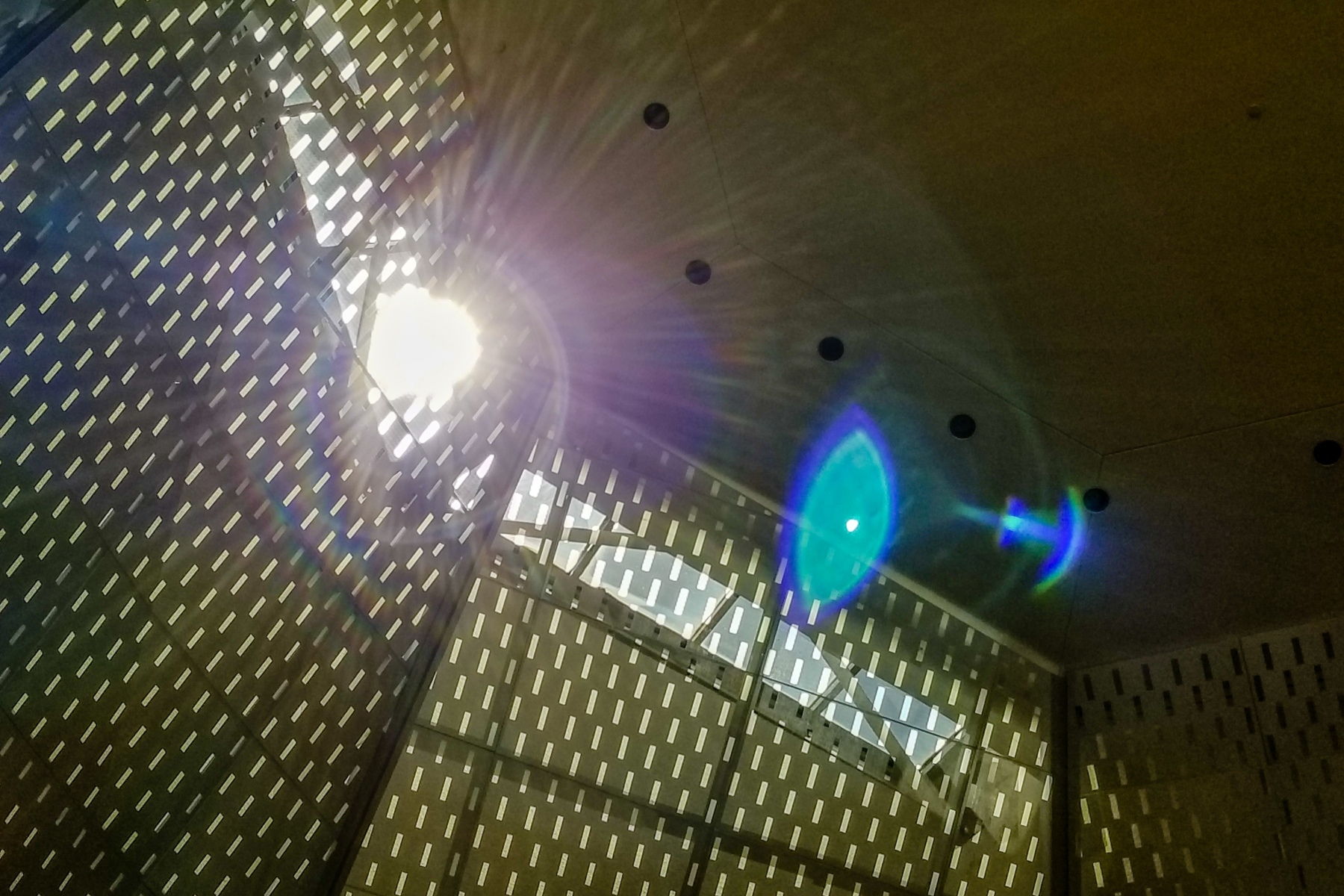 When I saw the announcement about a Morning of Prayer for staff at the university where I work, with “persons of all faith traditions… encouraged to attend,” I was curious but also skeptical but also hopeful.

I’d heard of interfaith dialog but I wasn’t sure I believed in it. It’s not how I was raised. How would such a thing even be possible?

So I went. I was nervous, sitting there in a pew of the chapel on a Thursday morning. I didn’t know what to expect. Would it be uncomfortable and awkward? Would I be asked to say things I didn’t believe? I felt my very presence was a challenge to the established order — and also the best gift I had to offer to my campus community.

What unfolded was surprising to me. Despite being called the Morning of Prayer, there was in point of fact very little in the way of prayer. There was a brief opening invocation, but after that the program consisted of a talk by one of my fellow employees, a period of silent reflection, a musical performance, another talk by another co-worker, and then a period of “voiced reflection,” where anyone in the audience could speak as they were moved.

I loved it. It was engaging and inspiring to hear my co-workers talk about their most deeply held values, to reflect on our shared mission and common purpose. There was no proselytizing. It was not a worship service as such. During the voiced reflection, I kept my mouth shut. But I left with a smile on my face.

I came back again next semester. And again and again.

Still, I kept quiet. This wasn’t always easy. When it came time for the voiced reflections, I often felt I had something to say, a perspective to offer, a different way of looking at things. It was that very difference which gave me pause. As long as I kept my mouth shut, it might be assumed that I was a Christian. Everyone else seemed to be. Would I be accepted, if they knew what was in my wild Pagan heart? Then again, holding myself apart and aloof could be a form of egoism. Perhaps I was merely stoking my own delusions of grandeur.

My lips quivered with words, ready to be given shape. But ultimately, on each Morning of Prayer, I felt the time was not ripe. I was waiting for something, though I didn’t know exactly what.

And then, eventually, I was invited to give a talk myself.

I work at a Catholic institution. I’ve found there is a lot of misunderstanding around what this means. I misunderstood it myself for many years.

This is a university, not a church. You don’t have to be Catholic to work here or to attend school here. In fact, most of our students are not Catholic.

And that’s how I saw myself for my first decade on campus. In my second decade, much has changed. The flooding of our city and the birth of my daughter brought about an awakening, of which I’ve written elsewhere.

My religious identity wasn’t necessarily a known quantity on campus at large, however. Anyone who’s read my column knows that I am an Earth-venerating Neo-Pagan. I’ve made no secret of that fact, publishing under my real name for all to read — but I don’t go around campus carrying a sign.

I think it’s safe to assume Campus Ministry knew I’d never been a Catholic. Mass is held in the chapel daily, but I never attend. I do frequent the chapel more than most, as I have convened a weekly meditation session there for years, but I always promoted this in a secular fashion. Had the folks at Campus Ministry read my column? Did they Google my name? Were they even aware of Paganism as a contemporary religious movement? Did they know what they were “in for”? I honestly did not know.

My conversations with Campus Ministry convinced me that they were sincere in their intention to welcome “all faith traditions.” I just wasn’t sure how much actual experience they had in this realm. It seems that sometimes the interfaith concept gets translated as “let’s invite some Protestants.” We have more religious diversity than that on our campus, but we don’t always recognize it.

So I was delighted to be asked to speak at the Morning of Prayer. It was something that I had secretly desired. But once the invitation had been issued, I had to grapple with the puzzle of what to say. Would I be the first non-Christian speaker at the Morning of Prayer? Such was my impression. I was breaking new ground. I had to get it right, to sound the right notes, to sing the right song. There was a lot riding on my performance. The president and the provost and the college deans would be there. Never mind the danger to my personal career — the whole future of interfaith dialog on our campus was depending on me! (Some hubris, huh?)

Out of the broom closet

Obviously, I had to speak from my heart with integrity, honesty, and candor. That much was simply required — a baseline, if you will. But I also had to be strategic and politically savvy. I had to recognize this unique moment, seize this unique opportunity, and make the most of it.

Above all, I wanted to validate Campus Ministry’s apparent openness. I wanted to acknowledge and celebrate the fact of my difference. I wanted to say, yes, I’m an atheistic Pagan, but we can still be friends. In fact, we have much to offer one another. To accomplish this, I needed to honor and respect all that I’ve come to cherish about the Catholicism of this institution.

So essentially that was my speech. Often we say that we are “honored” to be speaking at any given engagement; regardless of our sincerity, it functions as little more than a sort of throat-clearing before the actual talk. But in this case, expressing that sense of honor was really the sum and substance of my talk. I simply reflected on the moment and what it meant. I held it up to the light and watched the rays of the sun refract through it. While acknowledging my difference, I also stressed our underlying unity.

Did I succeed? Well, I think so. I haven’t been fired yet. Given the feedback I received immediately afterward, I believe Campus Ministry was glad they invited me.

These experiences have been instructive for me. By accident of birth, I enjoy many of the prominent privileges of our society: I am a cis-gendered straight “white” male of middle-class background. To be a religious minority, to feel the sharp edge of these anxieties, gives me a fresh perspective on the experiences of others.

When I mentioned this to a friend, she cautioned me. I was “sounding mighty liberal.” (She’s something of an anarchist.) I hastened to acknowledge that every dimension of identity has its unique and peculiar characteristics. Religious identity is constructed differently than race or class or gender or sexual orientation.

My friend also said that religious identity was a matter of choice, a wholly voluntary association. That doesn’t sit quite right with me. My lack of belief in various precepts of Christian theology has never seemed like a matter of choice. Identifying as Pagan and associating with Pagans feels a bit more volitional, but the crucial choice, really, is whether or not to reveal that identity to others. My friend has a point: I could keep my religious identity a secret. I could “pass” as Christian.

Others have noted the parallel between religious identity and sexual orientation for precisely this reason. We even have a phrase which encapsulates the idea for the Pagan community: “coming out of the broom closet.” Now I see it for myself.

I don’t claim that my religious identity gives me access to all the experiences of being LGBTQ or being in any other group that experiences oppression routinely. Of course not; that would be ridiculous. Even so, I fancy I can learn something through extrapolation, and I am hopeful this will make me a more thoughtful and compassionate ally in the struggle for justice.

About the Author: Bart Everson

What can we learn, and how can we teach, from the cycles of the Earth — both the cycles within us, and the cycles in which we find ourselves?

In addition to writing the A Pedagogy of Gaia column here at NaturalisticPaganism,Bart Everson is a writer, a photographer, a baker of bread, a husband and a father. An award-winning videographer, he is co-creator of ROX, the first TV show on the internet. As a media artist and an advocate for faculty development in higher education, he is interested in current and emerging trends in social media, blogging, podcasting, et cetera, as well as contemplative pedagogy and integrative learning. He is a founding member of the Green Party of Louisiana, past president of Friends of Lafitte Corridor, sometime contributor to Rising Tide, and a participant in New Orleans Lamplight Circle.

See all of Bart Everson’s posts.

← What’s that Flopping Noise? Ancestors? Yes! Wishing you a Happy Samhain! by Starstuff, Contemplating
Handy Rituals, Rites of Passage, and more! Recent Episodes of THE WONDER podcast, by Mark Green →