Posted on March 3, 2019 by NaturalisticPaganism 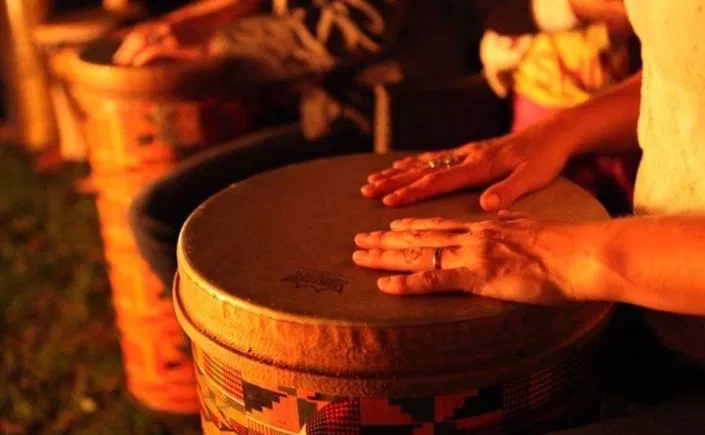 Note: This essay was originally published in multiple posts at Atheopaganism and is copyrighted. It has been published here with the explicit permission of the author.

The first musical instrument was almost certainly something resonant being struck: a hollow log, a dried gourd. In fact, percussive rhythm may predate humans as a species: monkeys have been observed beating on hollow logs in a call-and-response with other monkeys. Certainly the noises made while pounding seeds and roots into meal would naturally have become a source of play, even for pre-humans.

Despite this near-certainty, we don’t have any fossil evidence of Paleolithic drums. Only flutes, because they were made of bone and could survive. Still, in every culture of the world, we find percussive instruments, and with them, percussive play—often in a context of religious ceremony.

Drumming and the experience of rhythm is viscerally impactful upon human emotions. Rhythm stirs a desire to move, and it is no surprise that one of the most mysterious and yet joyful of human activities, dancing, relies heavily on rhythm.

Rhythm is a deeply effective ritual technology. Striking up a beat encourages ritual celebrants to participate with their bodies, not just their minds. Even a simple, steady “heartbeat drum” can have profound effect on the atmosphere of a ritual, creating a sense of solemnity and foreboding.

Here’s an example of how powerful ritual rhythm can be, in a popular music song.

Rhythmic sounds—drumming, rattling and other percussion—are helpful in bringing celebrants into entrainment, which is defined in the Atheopagan Ritual Primer as

“synchronization of participants with an external rhythm, …accomplished through repetition. Drumming and rattling are common means to the entrainment of a group creating a ritual. In a broader sense, however, entrainment means getting all participants ‘on the same page’, or moving in the same direction: to create a shared state in which they can express, celebrate and act together. Entrainment is a critically important aspect of successful ritual; when true entrainment has happened, you can feel that the ritual is really cooking.”

I encourage Atheopagans to master at the very least some simple rhythmic percussion for purposes of stirring up and maintaining energy during rituals.  And let your fellow participants help! It’s great to have a basket of rattles, claves, chimes and other rhythmic noisemakers for participants to borrow so they can participate in the soundscape of your ritual. Drumming can be particularly powerful during the Deep Play segment of ritual (see also the Primer again).

I’ll say as well that recorded rhythmic music can be effective as well–you just don’t have as much control over the tempo and duration of the sound. Dance music is called that for a reason! But to me, it feels better that the sounds for a ritual be generated there, by its participants, rather than reproduced electronically.

Drumming and rhythm are powerful gateways to the limbic, liminal Ritual State, or trance. Learning to master even simple drum rhythms will be powerful additions to your “ritual toolbox” as you learn to conduct Atheopagan rituals.

Note: Despite the illustration above, it is best to protect the drumhead by removing all rings prior to playing a drum, unless you are playing with drumsticks.

Since probably before humans were even human, there has been music. Rhythm, at least. And where there is rhythm, there is dance. There are preserved footprints in painted caves in France that indicate young boys dancing 20-30,000 years ago. Some ritual dances are still performed today after untold continuous centuries.

Ritual isn’t just something that happens in our heads. When effective, it is an immersive experience, involving our entire beings. We are not, after all, just brains carried by flesh robots…our nervous systems extend throughout our bodies and participate heavily in our brain states.

Effective rituals involve some kind of engagement of the body: singing, for example, or clapping, dancing, walking, or other movement to music or rhythm.

There is good reason for this. Stimulating the metabolism through exercise, especially in a creative, expressive form like dance or music-making, is deeply pleasurable and requires that the participant be Present in the limbic Ritual State. There is a reason why we are drawn to these activities: they are joyful, even when solemn. They enhance our lives’ happiness.

I’m a pretty “heady” person, myself. I feel awkward and it’s hard for me to let myself go and dance (but when I do, it feels like flying!) But I can say with confidence that the most powerful and joyful rituals I have done have all involved some kind of physical exertion, even if it is simply in the form of walking  or dancing free-form about a fire, feeling my body’s aliveness.

Incorporating movement into ritual can be challenging, because participants can be self-conscious and not want to “go first”. Lower light conditions reduce this, so firelight or candlelight or moonlight will help (there is a reason why dance clubs are dark!) As a ritual leader, however, never forget that you are setting the standard for what is “normal” in the circle. Participants are looking to you to see how to behave. So when it’s time to move, move! Push yourself to overcome any shyness you may feel, so others feel “permission” to let go and move themselves.

You can also start slowly, with swaying, perhaps, and raising the arms, and as the musical intensity increases, so does the movement.

Music contains all shades of emotion, so if you use music as well as rhythm, choose carefully. There is a list of recommended music for rituals here. Even better is to have one or more musicians as a part of your ritual, so they can work with the ritual atmosphere or energy in an organic manner.

Be sure to work with movement in an arc: start slower, build up, and then direct where that energy goes, be it into a final joyous sung tone to the sky, or slowing down again until participants are still and silent. There are plenty of possibilities, but don’t just let things go until they peter out: take them somewhere deliberate.

Movement and rhythm—the engagement of the body—are the parts of Atheopaganism that may be most unfamiliar and uncomfortable for those who come to experience it from the atheist community. The point of ritual is to get beyond thinking. Atheopaganism isn’t philosophy: it’s a practice. It is accomplished in the doing. If you or some of your participants, like me, tend to lead with their thinking minds, just know that it is intensely liberating to finally let the thinking go for awhile: to move, and be alive.

There is great joy in living in the animal self for a time, such as dancing around a fire to the beat of drums. It’s a challenge, for bleached-out men like me, getting to that animal self and honoring it.

But I try, and I encourage you to try, too.

Own your animal. Feel the breath going in, the happy surge of blood sugar as you eat on an empty stomach. Indulge the urge to howl at the moon, to dance about the fire. Find a way to get outside naked, and feel the sun on your skin. Run your hands over your body.

Feel that you are an animal, here on planet Earth, not only thinking and wondering at the glory of what we can understand, but grunting and snuffling through the underbrush for something delicious and sustaining.

Both are true. Both are what we are. Celebrate it. 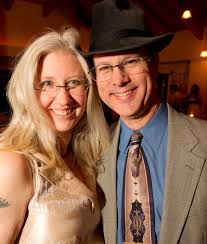 Mark Green is a writer, thinker, poet, musician and costuming geek who works in the public interest sector, primarily in environmental policy and ecological conservation. He lives in Sonoma County on California’s North Coast with his wife Nemea and Miri, the Cat of Foulness. For more information on Atheopaganism, visit Atheopaganism.wordpress.com, or the Facebook group at facebook.com/groups/godlessheathens.21.

See all of Mark Green’s posts.