What Do Gods And Mascots Have In Common? by Megan Manson

Posted on May 10, 2017 by NaturalisticPaganism

Ishio-san, a mascot representing the granite production of Ibaraki Prefecture in Japan. His name comes from the Japanese word “ishi,” meaing “stone,” and he is described as a “granite fairy.” Abasaa, CC Wikimedia Commons

Mascot culture is particularly strong in Japan, where practically every organisation or initiative is symbolised by some kind of cute character, or “yuru-kyara.” These yuru-kyara not only have their own unique image but may also be assigned a date of birth, personality traits, hobbies and even blood type (blood types in Japan are regarded in a similar way to star signs in the West, as they are said to determine one’s personality and outlook on life).

Mascots are everywhere. There’s no shortage of sports teams, companies, governmental campaigns and other organisations and projects that are represented by some form of cartoon person or anthropomorphised animal or object.

A bus depicting Kumamon, the mascot of Kumamoto Prefecture and one of the most popular Japanese mascots of all time. Muyo, CC Wikimedia Commons

The mascot’s image and concept will in some way reflect the thing that they are designed to represent. One of the most successful Japanese mascots of all time is Kumamon, the symbol of Kumamoto Prefecture. His concept is a play on the word “kuma,” which means “bear.” But in Japan, a mascots is more than a mere cute piece of corporate branding. Mascots are seen as highly desirable fashion statements. Slap a well-known mascot on practically any product in Japan, and people will want it. Not just children too – adults too indulge in the mascot craze.

Mascot culture reminds me very much of something we consider far older and far less whimsical – the pantheons of polytheistic religions.

Like mascots, the deities of the ancient Celts, Egyptians, Vikings and practically every other culture are symbolic personifications of the world around us – the Sun, the Moon, the Sea, the Sky and so on. They too have images and personalities that reflect what they represent. For example, Thor, the god of Thunder, is a strong, moody and fearsome warrior wielding a great hammer, representing the awesome power of storms.

But deities do not merely represent physical objects, and nowhere is this more apparent than perhaps the most extensive and well-known pantheon of all; the Classical pantheon. For the ancient Greeks and Romans not only have deities to represent the physical world – they also have deities to represent emotions, virtues, sins, artistic concepts, and even very abstract concepts such as opportunity, expediency and even outrageous behaviour. What I particularly love about the Greek and Roman gods is that there are even deities personifying things that seem quite mundane to us in the modern world. There’s Cyamites the god of beans, Cloacina the goddess of sewers, and even Sterquilinus, the god of manure!

There is of course a big difference between the Gods and Goddesses of old and the mascots of today. The Gods and Goddesses were, and still are, worshipped and respected as beings who are present in our daily live, while mascots, though they may be “idolised,” are not genuinely worshipped. But I think they both play one key, similar role. That is, to represent and familiarise concepts that we may find alien or threatening.

In the days before science, the Sun, Moon, Wind and other natural phenomena were not understood by our ancestors, which is why they personified these mysterious yet vitally important things as deities – entities with supernatural powers yet identifiably human-like (or at least, animal-like) characteristics. They were depicted as people with personalities, relationships and stories, which not only helped early people to conceptualise certain phenomena (such as the sun rising and falling), but also make those phenomena feel closer, more familiar, even “friendlier” in a way.

It’s interesting that the Greeks and Romans, with a very sophisticated understanding of science, had such a proliferation of deities representing the more abstract concepts such as emotions, and intangible phenomena like dreams and death. They had a fairly good understanding of how much of the world worked, yet still found these more philosophical considerations harder to grasp (just as modern man does). So they gave them forms that they could understand and identify with: that of people.

And I think this is still the case for Pagans and other polytheists today. Just like mascots, our conceptions of the gods and goddesses help us to identify with natural phenomena so we can feel close to them and approach them on our terms. I don’t think any Pagan literally believes that Hecate has the physical form a three-headed woman surrounded by snakes or dogs and clutching keys or torches. But it helps us to understand the spirit that we call “Hecate” to imagine her as such, and she may appear to us in meditations, dreams and visions as such because that is the image we have in our minds. It’s probably the case that our minds are just not equipped to understand the true nature of the Powers That Be, so it’s much easier for us to reduce them down to something like a mascot.

I do not believe that thinking of the deities in this way diminishes their sacredness and grandeur. It simply helps us feel close to them and appreciate them. Even scientists have similar methods for mentally grasping some of the very bizarre concepts in physics. All scientists know that the atom doesn’t really look like a solid ball, or a little electron planet whizzing around a sun nucleus, or even a vague cloud of electrons drifting around the nucleus in orbitals, but it’s helpful to visualise the atom as one of these three things depending on the work you are doing, because the real nature of the atom is far too weird and alien to our usual frame of reference to really compute.

Finally, some people might be wondering whether it’s crass to compare gods to mascots, simply because mascots are nothing but cheap logos that do nothing to influence our lives in a positive manner. I beg to differ. Take Kumamon for example. This happy black bear generated ¥123.2 billion in revenue in Japan throughout 2012-13. And Kumanon’s contribution to Japanese prosperity hasn’t ended there. On April 16th 2016, a series of powerful earthquakes struck Kumamoto, killing at least 50 people, wounding 3,000 others, and causing billions of dollars’ worth of damage. Within days, the local Kumamoto government employed Kumamon to help them with fundraising efforts. They relaxed all rules regarding the use of Kumamon’s image by businesses and companies, meaning that anyone could use him without prior approval. The aim was to help raise money for the victims of the earthquakes. By using a cute, appealing, anthropmorphised emblem of the Prefecture as a way to evoke an emotional response in the general public and translate that feeling into proactive donations. Through the awesome power that symbols evoke in the human mind, Kumamon has brought very real wealth and healing to his home of Kumamoto. 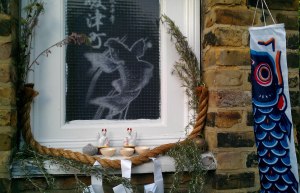 Megan is an eclectic Pagan from the UK who also practices Shinto, the Japanese “Way Of The Gods.” She is actively involved in the field of Japan-UK relations, interfaith activities, and her local Pagan community. Her blog can be found here, and her facebook page here.

← [Dead Ideas] “Russian Serfdom VII: Siberians and Old Believers”, by B. T. Newberg
[A Pedagogy of Gaia] Science in Service to Mother Earth, by Bart Everson →