Posted on May 10, 2016 by NaturalisticPaganism 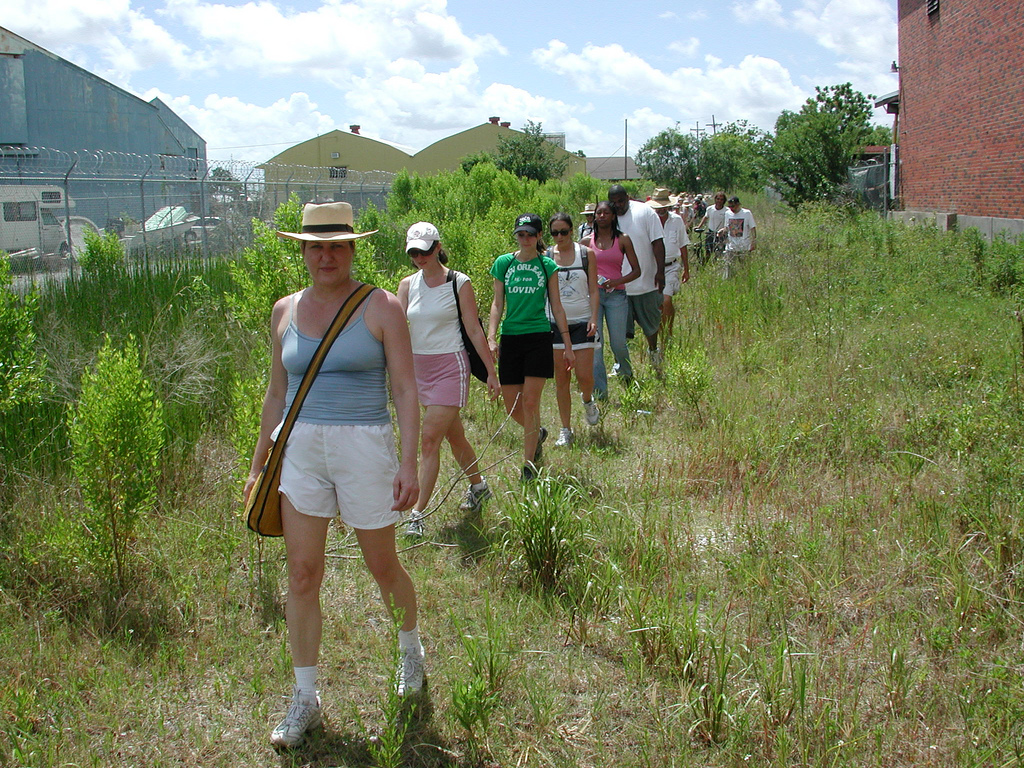 If you should ever venture down to New Orleans, I hope that you will take a stroll (or a bicycle ride) on the Lafitte Greenway. Besides being a fine example of greener urban infrastructure, this path has a story behind it. It’s a great example of the power of magical thinking.

The trail stretches almost three miles, starting near the famous French Quarter and proceeding through neighborhoods such as Tremé, Lafitte, and Mid-City, almost to Lakeview. Construction was only completed in 2015, but the story goes back much further.

In fact, the trail follows the line of the old Carondelet Canal, which was constructed in 1794 under Spanish rule. The canal was operated for over a century, connecting Bayou St. John to the city of New Orleans. Eventually a railroad was built alongside it. In time, the canal was filled in, and eventually the rail line was decommissioned. This corridor of land was neglected and vacant, a hazardous barrier zone that divided neighbors from one another.

I came into the story in 2005. I was walking with a friend near Bayou St. John in the spring of of that year. We saw workers removing the railroad tracks, pulling up the rails as we watched. My friend turned to me and said, “You know, that would make a good rails-to-trail project.”

I didn’t know it at the time, but those words would change my life.

A hike is born

Over the years that followed, I found myself getting more and more deeply involved in an effort to bring that rails-to-trails project to life. I helped start a nonprofit advocacy group, Friends of Lafitte Greenway. We began as an all-volunteer effort, writing grants and making connections, commissioning studies and building coalitions.

Every year, we organized a hike, and in time this became our signature event. It grew every year, and soon hundreds of people were coming out — to hike on a trail that didn’t exist.

Over the same time period, there were numerous other changes and challenges, both collective and highly personal. We suffered the flooding of the city. A friend was murdered. My daughter was born. I drank too much. The project endured setbacks and delays.

Through all the difficulties, to say nothing of the high weeds and brambles, we kept hiking.

It occurred to me, one year, that this was an example of magical thinking. That is, we were visualizing something that wasn’t really there, exercising the power of our collective imagination, through a public ritual, aiming to bring a new reality into being.

And it worked! After ten repetitions, the trail materialized beneath our feet. We walked this path right into existence. Surely this is true magic.

of the term is likely to be pejorative. For those with a naturalistic mindset, the phrase “magical thinking” is often a diss or a criticism, a suggestion of logical gaps or inconsistencies, similar to wishful thinking. Magical thinking is irrational and fallacious, attributing causal relationships where none exist.

To some extent, I agree with and participate in this perspective. I’m inherently skeptical. It’s good not to be overly credulous, and I have little patience for hucksters who prey upon the gullible for personal profit.

Neo-Pagans tend to see things differently, of course. Magic is generally considered in a positive light. This is one of the most promising aspects of the Pagan perspective: to re-enchant the world, to restore a crucial perspective that’s been lost.

Naturalists who embrace this project need to consider what magic really means, and what magical rituals might look like. I’d suggest they may look like our annual hike.

Skeptics might point out that there was a lot of hard work between the hikes: all the aforementioned fund-raising and planning and organizing, to say nothing of the actual physical labor of the workers who built the trail.

That doesn’t make the ritual any less magical. It just proves that magic requires a lot of hard work. Any serious practitioner of the craft knows that.

Moreover, while the annual hikes were symbolic of our community’s desire, but they were not only symbolic. They also served a real purpose, a real function. They kept the community focused on the common dream we shared. The ritual sharpened our resolve and strengthened our will.

I’m using the past tense, but I have no doubt that the annual hikes will continue. The work is not done. The dream is shifting a bit now that the initial buildout has occurred. Now we dream of extending the greenway further, and of improving what’s already been built. We dream of volleyball courts and community gardens.

So next time you’re down in New Orleans, come take a walk on this path made from dreams. See for yourself the glorious results that can come from magical thinking. And if you time it right, you can even join the next hike.

← It’s Easy to be Pagan in the Wild, by Lupa Greenwolf
Are We are all Green-Men and Women? by Renee Lehnen →