Posted on February 22, 2021 by NaturalisticPaganism

We again survived the dreaded 7 minutes of terror!  Our rover Perseverance is successfully on Mars!

As with the last time we landed a rover on mars, I am again reminded of how incredible it is to live now.  So many things would not just be amazing to nearly all of our Ancestors, but often would be literally indescribable.  While that deserves a whole post itself (or many!), and include many aspects of our everyday lives, this is yet another example of it – indeed, an example which goes beyond most others.

Additional successful firsts make this an historical couple of weeks. We also achieved the arrival of the first Mars orbiter from the United Arab Emirates (the Hope orbiter on February 9th), and the arrival of the first Chinese Mars orbiter (the Tianwen-1 orbiter on February 10th)!  I think it’s important to recognized that we achieved these too, as these are accomplishments of our vast human family, which goes beyond this or that arbitrary country designation.  Another historical first is the arrival of the Chinese rover.  The Tianwen-1 rover, if it lands successfully (targeted for June), will be the first Chinese rover on the red planet, and indeed the first successful Mars rover from any country other than the United States.  Perhaps the most incredible first here is the potential flying of the Ingenuity helicopter on Mars!  It is now strapped to the bottom of the rover, and will attempt to fly within months.  With a tiny fraction of the Earth’s atmosphere on Mars, I was initially surprised that helicopter flight was even possible – but it apparently is, helped along by the much lower Mars gravity.  As before, this monumental achievement is very inexpensive*, making it all the more odd that opponents of scientific achievement use the cost as an argument against it.

Landing on Mars is HARD.

We successfully landed the Perseverance rover on Mars on 18 February 2021 at 20:55 UTC.  This is one of just a handful of attempts that have been made to successfully land spacecraft on Mars.  The first successful landing on Mars was by the Soviet Mars 3 Lander way back in 1971, before many of us were alive.  This extremely difficult task has very often been met with destruction, as the efforts of hundreds of the best minds on Earth end up failing to land the spacecraft successfully.  Of the 17 attempts to land on Mars, only 7 have been successful, for a ~60% failure rate.  Most of these have burned up in the Martian atmosphere, while the fate of many of them is still a mystery, even after many years.  Failures have come from attempts by the United States, by the European Space Agency, and by the Soviet Union. 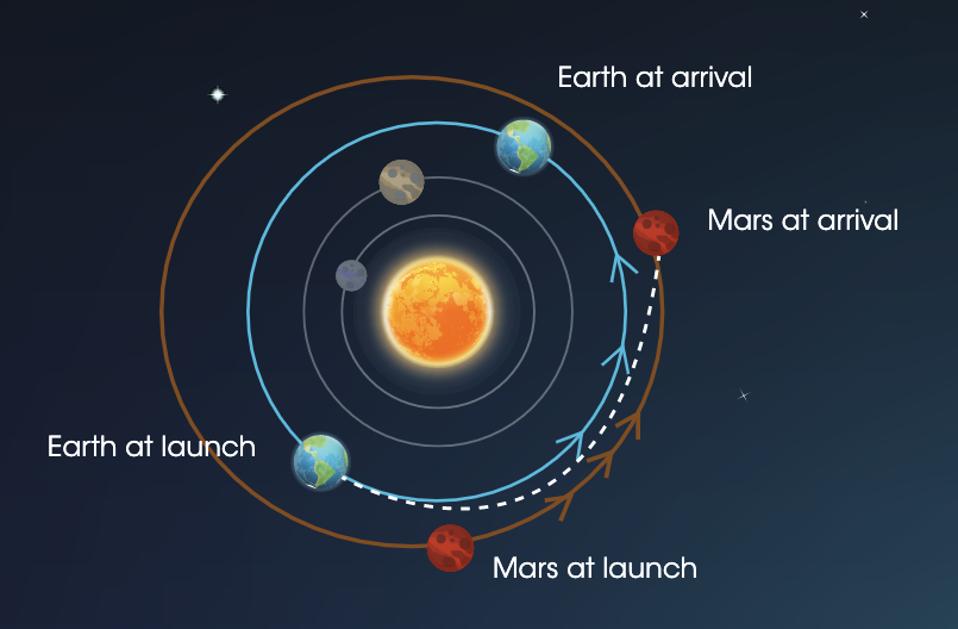 Steps to a Successful Landing

Part of the reason it is so hard to land on Mars is that Mars has a thin atmosphere – both too thick to ignore, yet too thin to provide very strong use of parachutes at the end of the landing stage.  The many different methods – from bouncing balloons to counter-blast rockets – which have been tried are too extensive to describe in detail here, but I encourage anyone interested to look into the many methods tried.  A really cool video + description of the full landing sequence planned for this attempt is described here, with another here.  The main NASA page, with details on every part of the rover, the overall mission, and much more is here.  The main phases of this daring landing are Entry, Descent, and Landing.

While much of the world was in pandemic lockdown back in July, all three of the spacecraft mentioned above lauched.  From then until arrival on mars, each of them have been together as one unit.

As Perseverance approached Mars at speeds over 10,000 miles an hour, the unit contained the solar panels (top) which separated from the entry capsule (bottom), with the entry capsule in free fall towards Mars.  The only thing slowing down our spacecraft at this point was friction with the thin Martian atmosphere.  The heat shield glowed with heat of entry, reaching temperatures around 2,700 F. 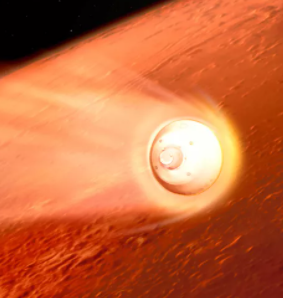 The heatshield survived, and our spacecraft had slowed to around 4,000 miles per hour.  It was approaching terminal velocity, and so will need additional means to slow it’s descent further.  When going around 1,000 miles per hour, the parachute deployed, which slowed it further.  During this deceleration, the heat shield was jettisoned, exposing the lander.

At 1 km (over a half mile) above the Martian surface, the lander literally dropped off the capsule!  Yes, the plan was to simply drop it off from the parachute, so it free-fell towards the surface!  Help me out here, but to me, this seems extremely risky.  I have to remind myself of how much work has gone into this decision, and that those doing so understand what’s involved here much better than I.  I’ve dropped things from far above the ground, and they tumble and turn.  But, after this worked wonderfully with the Curiosity rover, it makes sense to use the same method again.

After some free-fall, the lander fired rockets to slow and control it’s fall, then suspended the Perseverance rover from nylon cords, setting it gently onto the rocky surface of an alien planet.  All of the steps above seem hard enough, but the last seconds before landing seem hard to me too.  How can we know when to turn off the rockets?  A couple seconds too soon, and the landers drops onto the surface, smashing to bits (remember that at about 1/1000th of Earth atmosphere, things fall nearly as fast as in a vacuum – imagine a feather smashing to the ground as fast as a dropped rock).  But a couple of seconds too late, and the rockets blast against the rock, potentially blasting the rover.   Timing it perfectly, wow!  Here is how the landing unfolded!

Did you know of this before this month?  Have you been informed of this, as it developed since being planned in 2012?  Was this a lead story in our news for years?  No.  I know that we have had important stuff (democracy in America was nearly lost, and is far from safe even now, after all) – but would even a few minutes every few months amid all the “reality” shows, football, and Tiktok been too hard to cover?  I don’t put all or even most of the blame on the media.  After all, this is capitalism – the media is driven by ratings, and hence they supply what they estimate people want.  I blame mostly our culture.  A culture that cares more about suppressing blacks who protest police brutality or are unhappy that Christmas isn’t forced on everyone more than it already is than about the tremendous achievements we are accomplishing.

Can you imagine describing this one of your Ancestors from 5,000 years ago?  Even convincing her or him that the Earth is not flat, and that Mars is truly another whole world (or even that most people really don’t have to worry where the next meal is coming from, or that some people have automatically heating houses) would be hard enough, even before the science of atmospheric frictional heating or what the heck a “solar panel” is (or even electricity, for that matter)?   But no, with all that astounding wonder, even an attempt at a Mars landing gets barely a whisper in our culture, and most people won’t know it happened, if they would even care.  Still, I don’t see this as something to be discouraged about, but rather a reminder of how vital, how massively important, our work together in building a reality based culture of wonder and awe, is.

Thank you for doing your part – wow, again, a successful landing!  I don’t have a ritual written out, but I have performed a short ritual which brought this up and called to both our Ancestors and future generations.  Even though my little ritual won’t make a successful landing any more likely, it does great things for me.  Blessed be.

* With planning and operation from 2012 to 2023, this cost each of us only 76 cents per year.  By comparison, Trump’s disastrous pandemic denialism cost  over 2,000 times as much ($6,400 billion vs. $2.7 billion: with the total pandemic impact to the United States of around 16,000 Billion, and Trump’s denialism causing around 40% of this, 0.4 X 16,000 = 6,400 Billion).  That’s right, if Trump had simply accepted science, we could have sent literally thousands of these landers across the solar system and still had money left over, as well as saved hundreds of thousands of American lives.