Posted on September 15, 2018 by NaturalisticPaganism

The energy beam is about to hit, just when our shields are not ready and we are most vulnerable!  Sci-fi?  No, this is reality, for you, on Earth, right now.  And it means we have

a great chance for auroras on September 17th, when it will arrive and crash against the magnetic field of our Earth, which normally shields us, but has cracks right now.

**Update – This one fizzled.  No significant auroras were seen, unlike last year’s giant storm.  **** 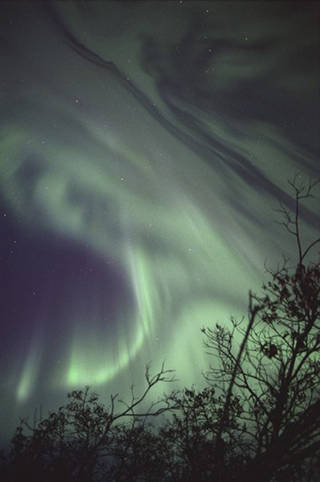 From the Samhain Solar Storm of 2003

What do I need to do to see them?

It’s virtually certain that at least some places will get auroras on the 17th (depending on where you are, this can include the night of the 16th and/or the night of the 17th).  If you can see clear, dark skies at a latitude above around 45 degrees, consider going out.  You can also sign up for getting a free, immediate email notification if auroras appear near you.  There are plenty of details (and caveats) below – but that’s all you need to know to see them.   I’ve seen incredible auroras twice, and pretty darn cool auroras probably a dozen times.  I won’t take the time now to describe all of them, but the shimmering, waving sheets and streamers across the sky are transformative.

Where to start?  First of all, we can’t know for sure what will happen – only what the probabilities are.   Over the year, auroras are a little more likely near two of our Sabbats – the Equinoxes.  Because the Wheel of the Year gives us both a temperature cycle as well as a cycle of waxing and waning daylight, the Equinoxes (while being equally light) are not equally warm.  The Fall Equinox is thus the perfect time for aurora viewing, with longer dark nights, warm temperatures, and the auroras themselves.  The two interwoven cycles that make our 8 Sabbats each special are explored here.

Scientists only discovered the cause of Equinox Cracks in Earth’s magnetic shield recently, though we’ve known that auroras happen more often near the Equinoxes for a long time (centuries? millenia?).  With a dark sky unpolluted by electric lights, I would think that elders among our Ancestors even 20,000 years ago probably have noticed that they remembered auroras happening more often around harvest time.  In any case, like so many other aspects of our world, with scientific investigation, we now have a better understanding of why and how.  Due to geometry, then the Earth’s axis is perpendicular to a line from the Sun to the Earth (the direction of the solar wind), it’s possible for polarities to cancel out, making magnetic reconnections which cause parts of the magnetic field to disappear, where the solar wind can pour through.  More on how this works here.

But having Equinox cracks in our magnetic field is not sufficient for auroras.  If it were, we’d see auroras every Equinox, on a regular schedule.  We don’t.  It’s highly erratic.  That’s because the because the amount of solar activity (and hence the strength of the solar wind itself) is the biggest factor.

In addition to Equinox cracks in the magnetic shield, the 11 year solar cycle affects when solar activity is more likely.   There are many different types of solar activity that can lead to auroras.  One of the most common is a coronal mass ejection (CME).  That’s what made last year’s massive auroral display.  However, this time it’s a coronal hole, which opens an easy passage for charged particles, (which race outward at millions of miles an hour, and consists of many different types of energetic particles).  When these energetic particles slam into the earth, they are mostly deflected by the  magetnosphere, and reach farther toward the Earth’s surface along the magnetic poles, where the magnetic field lines are vertical instead of being horizontal.  There’s more to it, but this is the basic reason why we get Northern lights (Aurora Borealis) and Southern lights (Aurora Australis).

The most recent solar cycles, by sunspot number. Notice that the current cycle (#24) is relatively weak.

If this one fizzles, or if you aren’t in a good area for viewing, or clouds intervene (as they likely will here in Michigan), the graph above suggests that a flares as powerful as this will likely come again by 2025, when the next solar cycle (#25) is likely to peak.  Either way, I hope you get to experience this wonderful part of our Earth (and Universe!) centered spirituality – and, if possible, to share it with kids, who will build the world of tomorrow.

Auroral Oval Map from a strong storm. If the map looks like this, and the red area moves near you, get outside and look!

Naturalists of any religion have, I think, a special connection to our world.  As the only world we have- which are are part of, we cherish it and revel in it, savoring the gifts this Universe has to offer, during this one brief life we know we have.  Auroras are one more of those wonderful gifts.