Survivors and the Terminator, by Brock Haussamen

Posted on November 26, 2017 by NaturalisticPaganism

Yes. In Survivors: The Animals and Plants that Time Has Left Behind, Richard Fortey tracks down some present-day creatures that look much like their fossilizeds ancestors from millions of years ago. Oddly, their stories of sameness impress me with as strong a sense of evolution’s power as the stories of other species, including ours., that have changed to adapt. 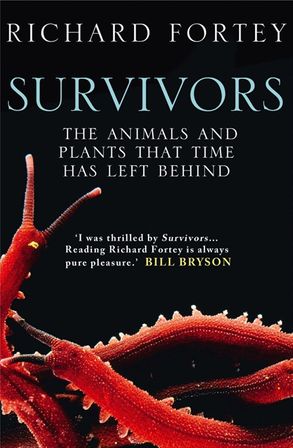 In the darkness along Delaware Bay the scratching percussion of the crabs provides an unmusical accompaniment on an imaginary journey backwards in time: to an era well before mammals and flowering plants; a time before the acme of giant reptiles, long before Tyrannosaurus; backwards again through an extinction event 250,000,000 years ago that wiped nine-tenths of life from the earth; and then back still further, before a time of lush coal forests to a stage in the earth’s history when the land was stark and life was cradled in the sea.In the opening chapter, Fortey is on a beach in Delaware on the night of the annual horseshoe crab orgy, when thousands of male horseshoe crabs come ashore to clamber on top of the females. Horseshoe crabs have  been scrambling up beaches for 500 million years.

Four hundred mya, plants like this Norwegian Huperzia moved from the water to land and were among the first to acquire the crucial, stiffened water-conducting tubes that enabled them to stand upright and compete for light.
(newfs.s3.amazonaws.com)

In the other chapters, Fortey describes the velvet worm in New Zealand, the lovely Norwegian fir moss, the not-so-lovely lungfish. The photo captions here mention their particular keys to adaptive success.

It helps that their environments have changed very little. “Survival is about endurance of habitat.” One habitat that endures is the tidal flat, where the shallow sea meets the muddy shore. Organisms here can burrow, find oxygen in the water and air, find food through filtering or scavenging. Here are horseshoe crabs, snails, small fish, many plants. “This habitat does seem like a good place to be for an organism with conservative tendencies. If its own place survives, then so will the beast. It is the right place to weather mass extinctions that affect many other environments more severely.…Stick-in-the-muds last longest.”

In Australia, Fortey finds the lungfish that dates back 400 mya, “the great survivor among the vertebrates, the animals with backbones.” With lungs, these sea creatures, in the transition to the land, can gulp air when the river runs low on oxygen. (media-web.britannica.com)

As for the durable species themselves, a few characteristics recur. “Many…seem to have long life spans.” Horseshoe crabs take a decade to mature. And some enduring animals invest more resources in fewer progeny by producing “relatively large eggs or few offspring.” But there are no fool-proof formulae. “[T]he luck for old timers will eventually run out. It always does.”

What about humans? When will our time run out? Fortey doesn’t make guesses, but he has a hard label for us.

[Early man] may have hunted edible mammals and birds to the point of obliteration even in his earliest days; he was the first species that deserves to be called the Terminator….The extinction event that is happening right now is the first one in history that is the responsibility of a single species. There’s no meteorite this time, no exceptional volcanic eruptions, no ‘snowball earth,’ just us, prospering at the expense of other species.

I grew up in New York City and now live in New Jersey, where I taught English for four decades at a community college, a profession I found  varied and rewarding. I’m married, with family in the area.

I retired in 2006 in part to fight poverty as best I could, at every level I could–locally, nationally, and in Africa. I’ve become a local volunteer and on-line advocate and along the way have learned fast about the economic, political, and legal issues that accompany poverty.

I also found myself thinking more about the central questions that catch up with us sooner or later: What is my purpose? How will I face death? What do I believe in? I have always liked the descriptions from science about how living things work, about the history of the earth, about the nature of the cosmos. But I could not put those pictures together with my questions. Gradually I came to see that life’s history over 3.8 billion years stood inside and throughout my being and constituted my livingness at its core. In my blog at threepointeightbillionyears.com, I’ve been exploring the variety of ways in which our experience is anchored not just in our evolution from primates but in the much longer lifespan of life itself.

← This Historic Moment (Part II), by [Starstuff, Contemplating]
“Let The Sun Shine in at Christmas” by Gary Suttle →