Queer Disbelief: You can help make this book a reality!

Posted on October 10, 2017 by NaturalisticPaganism

It’s just 8 days until this campaign ends, so help now!  It takes a lot of courage to come out publicly as a member of an oppressed group which can otherwise be hidden (commonly known as “passing”). 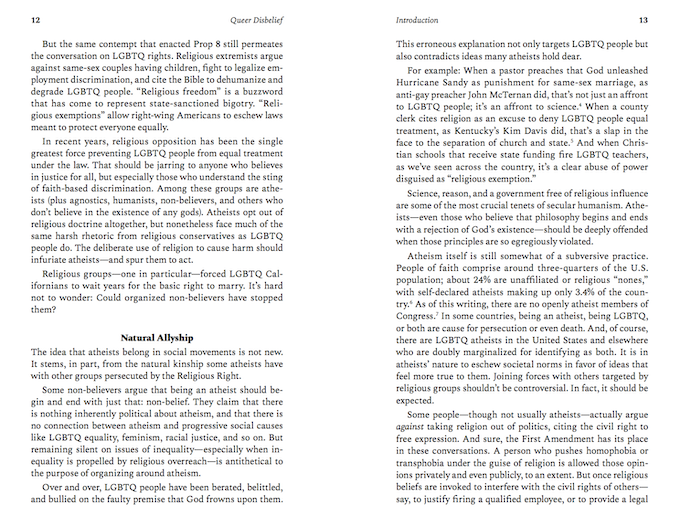 Sample pages from the introduction to Queer Disbelief

Three of the many categories people are often able to “pass” in are Atheist, LGBTQA, and Pagan.  As Naturalistic Pagans, many of us are still in the Broom Closet, and also not out as Atheists, among in-laws, coworkers, and other areas of our lives.  This is how many LGBTQA people live as well, with as much or more real fear of harm should the hidden parts of themselves become known.  Also, many of us – in the wider Pagan community, wider Atheist community, and our small Naturalistic Pagan community – are LGBTQA.

Whether it is straight privilege, Christian privilege, or forms of dominant group privilege, many of us are targeted in any of a variety of ways in our lives.  The recognition that all these different categories of oppression are intertwined is called “intersectionality”, and intersectionality is becoming more and more relevant every day.  This book draws on the commonalities in the lives of people who are queer, Atheist, and both, to help support both members of those groups as well as all of us.

Many of us read Hemant Mehta’s blog, The Friendly Atheist.   In introducing this book, he writes:

I’m been waiting a long time to announce this.

Longtime readers may be familiar with Camille Beredjick, who used to write quite a bit for this site about LGBTQ rights. Her posts were easy to understand even for people who didn’t follow the issue, critical of those getting in the way of equal rights, and always on the side of reason and compassion.

Last year, we embarked on a more long-term project involving that topic. Specifically, we wanted to explore how the LGBTQ and atheist communities overlapped, where the comparisons broke down, how religion hurt (and helped!) LGBTQ people, and why atheists can’t ignore this issue.

It looks like a great book, and an important cause.  I’ve contributed.  With only a matter of days left in the kickstarter campaign, now is your chance.