Posted on June 30, 2017 by NaturalisticPaganism

After posting about the latest round of polytheist/theist/atheist Pagan discussions, I realized how peaceful we really are.  Peaceful?  After one or another Pagan suggested that they were Paganer than this or that other Pagan?  Yes.  Because while we have a few disagreements, those are really very small when we realize that our theological gulf is much larger than most other umbrella religions, and that, simultaneously, our divisiveness is much, much less than other umbrella religions.

Consider for a moment the huge differences we embrace.  We are orders of magnitude more diverse!  After all, our diversity includes very different worldviews, with very different gods or none. Few Pagans even worship the same gods. That’s practically unheard of in other religions, where practically everyone agrees on the pantheon, and 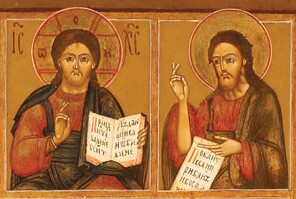 often on much more. Most other religions agree on the names, natures, and attributes of their gods, as well as many specific miracles, specific requirements in action and thought, and more. Anyone who listened to the dead ideas post on Russian serfs heard about the “two finger” controversy, where Russian Christians tortured and killed each other over the question of whether the sign of the cross was to be done with two fingers or three!  We Pagans, on the other hand, rarely even have the same names for our gods (even in the rare case where we agree on the number of gods!), much less specific required rites, and what other religions even start to openly tolerate Atheists?!?  With that, it’s kinda amazing we have only some verbal conflict, and nothing beyond verbal conflict.

And that brings me to the second realization – that we have a staggering level of peace by comparison to nearly any other religious approach. After all, when’s the last time you heard of Pagans torturing and killing each other for 300 years, with millions dead, whole countries devastated and over 20% of the population dead because they were the wrong type of their religion (like Christians did in Europe, 1500 to 1700)? By comparison, note that World War II, with all it’s modern killing machinery and madman bent on wiping out whole groups of people, only ended up killing 8% of the E 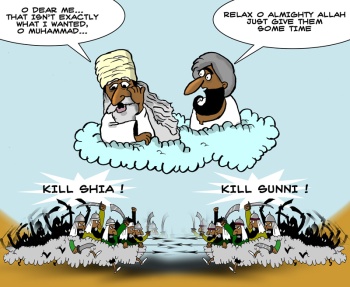 uropean population.  It’s practically a running joke that so many Christians not only consider other denominations “not Christian”, but even those not in their same local church – and again, look at how similar their beliefs are compared to our huge diversity.  They even often have the same (or very similar) sacred text (the various Bibles)!

Sunni and Shia Muslims kill each other every day over “who’s the real Muslim”, and have had (and still have!) full scale, country sized wars over that, with millions dead. Oh yeah, even within Sunni or Shia Islam, it’s the 7ers vs. the 12ers vs the 9ers and so on (who believe that the Islam found by the 7th Imam after Mohammad is the one true faith, etc.).  And again, they even often have the same sacred text (the Qu’ran)!

Hindus kill each other all the time over who’s the real Hindu. The Gujarat slaughter

s were just a few years ago, killing hundreds to thousands of people, and that started as an intra-Hindu conflict (later spreading to be also Hindu vs Muslim), and that’s just the start of Hindu vs Hindu violence.

Buddhist intra-religion violence doesn’t come to mind off the top of my head, but a lot of that could distance, and the fact that China (the country with the biggest Buddhist population) is official non- religious, discouraging open religious conflict.

Jews kill or attack other Jews (mostly in Israel) over who is the true Jew and who is a heretic.

And of course, all this violence is generally less than what intra-religion violence was in the past.  For all of these, this is just skimming the surface, and a full review of Muslim vs Muslim, or Christian vs Christian, or Shinto vs Shinto, etc, religious violence would be many volumes long.

If the Christians weren’t so often saying that all other Christians aren’t true Christian, jokes like “True ChristianTM” and so on wouldn’t be so obvious and common. Heck, check out the joke below (by Emo Phillips), which won an award in 2005.

He said, “Nobody loves me.”

I said, “God loves you. Do you believe in God?”

I said, “Me, too! Protestant or Catholic?”

I said, “Me, too! What denomination?”

I said, “Me, too! Northern Conservative Baptist or Northern Liberal Baptist?”

He said, “Northern Conservative Baptist Great Lakes Region.” I said, “Me, too!”

People laugh at that because they see, over and over, how true it is.  Practically every week I’ll hear Christians say that those other Christians “aren’t Christians”.  We are better than that.  We do better than that usually, and I hope we continue to do so.  I think that a lot of this is because due to our histories, many of us are very familiar with religious shunning (it even has a specific name in Christianity) as “heretics”, and don’t want to do that to anyone.  I think that a lot of our mutual tolerance & acceptance is because we don’t have the horrific and deeply harmful doctrine of a “hell”.  We, unlike a lot of people, can be confident in accepting other beliefs – partly because none of us think that those beliefs are going to send anyone to eternal torture.  I agree that it would be nice if we Pagans were completely harmonious and accepting of each other – but by comparison with practically anyone else, we are doing really, really awesome, and no one has killed or even physically attacked anyone, as far as I know.    Blessed be.

Dr. Jon Cleland Host is a scientist who earned his PhD in materials science at Northwestern University & has conducted research at Hemlock Semiconductor and Dow Corning since 1997.  He holds eight patents and has authored over three dozen internal scientific papers and eleven papers for peer-reviewed scientific journals, including the journal Nature.  He has taught classes on biology, math, chemistry, physics and general science at Delta College and Saginaw Valley State University.  Jon grew up near Pontiac, and has been building a reality-based spirituality for over 30 years, first as a Catholic and now as a Unitarian Universalist, including collaborating with Michael Dowd and Connie Barlow to spread the awe and wonder of the Great Story of our Universe (see www.thegreatstory.org, and the blog at evolutionarytimes.org).  Jon’s youtube channel, with videos about DNA, spirituality, and more, is here.  Jon and his wife have four sons, whom they embrace within a Universe-centered, Pagan, family spirituality.  He currently moderates the yahoo group Naturalistic Paganism, maintains a hub page for Naturalistic Paganism., and helped establish the new blog aggregator for Naturalistic Pagan blog posts (NaturalPagans.com).

Jon is also a regular columnist here at HP.  His column is called Starstuff, Contemplating.

← [Dead Ideas] “Cuneiform I: You’ve Got Mail – The World’s First Writing”, by B. T. Newberg
A Secular Spirituality from the Seasons? A July 9th Event Notice from Bart Everson →

2 Comments on “Our Peaceful and Harmonious Pagan Community – Really!”